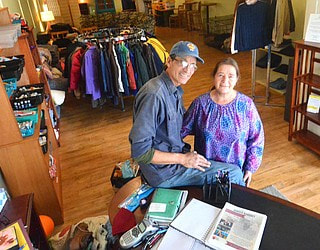 Photo Credit and Story by: Vyto Starinskas, Verde Valley Independent
​SEDONA -- The Sedona Area Homeless Alliance new homeless resource center in Sedona has opened on a “Wing” and a “prayer.”

The “Wing” is Wing and Laurie – the couple who founded the SAHA.

Wing and Laurie (they prefer first names only) walk the talk when it comes to helping the homeless in Sedona by raising donations and distributing food and temporary shelter items for the past three years -- at times while living out of their car with their two dogs.


​The “prayer” is the $10,000 in donations they have been hoping for to open their center. They have raised $3,000 since it was leased in January.
They don’t want to call their new homeless office a shelter. The space is filled with couches and tables and it’s a place for homeless people to come in and socialize, Laurie said, but it’s much more than just that. “Our mission is to provide immediate need, to keep people safe and alive; but our main mission is reconnect our local homeless back into our community.”

SAHA also raises and provides clothing, meals though a food-recovery program, tents, sleeping bags, blankets and all items for shelter, hygiene items, helps homeless sign up for disability and food stamps, apply for dental services and provides hair cut services and computers for research.
“Everything we do is very purposeful,” Laurie said. “Building up a homeless person’s self-respect encourages them to seek jobs and housing on their own,” she said.

Take all you need
Walking into their homeless center, it appears to be a spotlessly clean, second-hand store with several racks of coats and clothing. The difference is that all the coats and clothing are free, and Laurie stresses that people can take as much clothing or anything in the center that they need. Laurie said she has worked with about 15 homeless people since they opened, and all of them need help -- despite having employment in Sedona. “Most of our local homeless do work,” she said. “I don’t know any of our local homeless that don’t support themselves,” said Laurie, “Some are professional jobs, some have businesses that do yard work and things like that,” and “we have so many people who are artists that sell things at local shops.”

Laurie said homeless live in tents and in cars and work in Sedona. A lot of times people don’t take showers, they go to the library or one of the local stores and wash up in the bathrooms. She said people don’t really join gyms just to take showers because of the cost. Some people go to the state parks, Laurie added. “People don’t like to be in those situations,” she said.

Beyond the coat and clothing racks are several couches where homeless people can relax and get off the street. In the summer, that can mean 100-degree temperatures. Laurie said all the furniture has been donated. In the back of the office they have a food cupboard, with shelves of food geared to their population; quick to serve and eat. They said that volunteers bring in hot lunches in pots. The building’s hours are 8 a.m. to 5 p.m.
The socializing between the homeless people “has happened so organically and naturally, it’s been amazing.”

Laurie said the next week will be cold and wet and she expects to have people coming in out of the cold. The new center cannot offer overnight shelter, according to the agreement with the landlord, she said, but added that their space is not right for an overnight shelter. If they opened a cold-weather shelter, it would be in another location where they would have more space or go back to renting motel rooms in emergency cold-weather situations.

Laurie said the organization can use volunteers, food and clothing donations. People can donate to SAHA at Sedonahomeless.org

“The more times people come in and they feel like they are at home, the more they remember what that feeling was, and the more that they desire it,” Laurie said.
​
​Originally published by the Verde Valley Independent on February 16, 2019.

SAHA was created last winter, after Moore and her partner Wing Ryan discovered a shout-out on Facebook from two people passing through the area that were in need of a tent and two sleeping bags. The post sparked the idea of creating a wish list with items that would benefit the homeless community in Sedona and asking people to donate those items. ​

“People started bringing over things at all times of the day and night. We had to install a bin in front of the house so donations could be dropped off any time,” Moore said.

Three weeks after its founding, SAHA became a nonprofit under the Verde Valley Homeless Coalition. The next step for Moore and Ryan is to become their own 501(c)(3) organization.

SAHA is funded solely from individual donations from the community in Sedona. Moore would like to keep it that way, as she is convinced that the organization will only last if it is supported directly by Sedonans who believe in the cause.

“After we changed to 45 degrees, we realized that meant providing shelter every single night of the winter,” Moore said.

SAHA is able to shelter 15 people every night. However, this is not sufficient, according to Moore, who said that approximately 300 people in the Verde Valley are homeless, and around 85 of them live in Sedona. She stressed that those are rough estimates and that the numbers are probably a lot bigger. This is why SAHA’s imminent goal is to acquire its own building to shelter more people. Since traditional shelters are often not popular with the homeless, SAHA wants to be different.

“We want people to become whole again, but they should decide what whole looks like for them,” Moore said.

Other services provided by SAHA include hot meals that are cooked by Sedonans and then distributed among the homeless — a project called Community Kitchen — free haircuts provided by stylists, as well as Shower Hour, which runs every day from 10 a.m. to 4 p.m.

In her presentation, Moore tackled some of the prejudices that homeless people are often confronted with, such as the notion that they are too lazy to get a job.

“Nobody is standing on the corner, nobody is sleeping in a bush because they are lazy,” Moore said.

The majority of the homeless people she has met struggle with mental illnesses, PTSD being the most common one.

She also pointed out that getting a job is often the last goal in a series of steps that have to happen before that. These steps can be as simple as having dental work done or being healthy enough to go to a job interview. Moore said, “In order to make good decisions, you have to feel good.”

Moore also addressed addiction among the homeless, an issue that is often brought up. She thinks that addiction is not the cause of homelessness, but rather of a fundamental disconnection from one’s family or community. SAHA’s ultimate goal is thus to integrate people back into the community.

SAHA is in need of volunteers, according to Moore, who said, “I even need a volunteer to set up a volunteer program.” But money is also always an issue, which is why she encouraged people to make a tax-deductible donation before filing their taxes in April.

Moore pointed to SAHA’s item drives. Socks and underwear are always needed, as well as soap and pet store gift cards. A complete list of items as well as the opportunity to donate can be found at sedonahomeless.org.

Moore offered an answer to the question, “Should I give money to people standing on the corner in front of the grocery store?” She said that giving is an individual choice.

“There is no guilt in not giving, and there is no glory in giving. Nobody should feel guilty for pulling away from someone and not giving. What I’d really like to change is the way we look at these people on the corner.”
​Steph Berens can be reached at 282-7795, ext. 129.